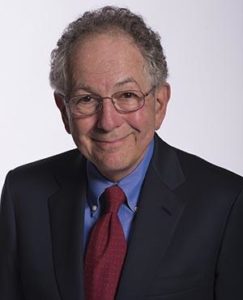 Jeffrey E. Garten became the Juan Trippe Professor of International Trade, Finance and Business at the Yale School of Management on July 1, 2005.  His teaching focuses on global finance and global business. In “Understanding Global Financial Centers,” his students focus on New York City, London, Dubai, and Hong Kong, examining the foundations for competitiveness in financial services, and they conduct their studies in each city.  In “Washington and Wall Street: Markets, Policy and Politics” the course focuses on the interplay of the many factors that constitute the global marketplace, with periods of time spent in both New York and Washington.  In “China in the Global Economy,” he takes students to China to examine global economic and financial issues from a Chinese viewpoint.  In “Leading A Global Company,” each year his course focuses on a dozen great global companies and he jointly teaches the cases with the CEO or Chairman of each company.  In “Managing Global Catastrophes,” the classes study ten of the great disasters of recent times, from the Asian Tsunami, to the BP Oil Spill, to the Somali famine, all with an eye to learning about extreme crisis management.

From 1995-2005 he was the dean of the School. While he held that position, the Yale SOM established an International Center for Finance; an International Institute for Corporate Governance; a Venture Capital Fund for Projects in New Haven; the Yale SOM – Goldman Sachs Partnership on Nonprofit Ventures; and an executive MBA program in Health Care Management.  The number of student applications increased 75%; the size of the faculty grew by 42%; and the School’s endowment increased from $137 million to $362 million.

Garten is also chairman of Garten Rothkopf, a global consulting firm which he co-founded in October 2005. The company’s focus is on helping global companies and organizations deal with major transformational trends, such as new pressures on natural resources; strains on the environment; the expansion of multinational companies from emerging market economies; and the pressures of growing indebtedness in the West and Japan.  Garten Rothkopf has a special focus on translating policy trends and decisions into commercial implications for senior business leaders, as well as building scenarios for unexpected developments of significant magnitude.

Garten currently serves on the boards of directors of the Aetna Corporation, CarMax Inc., Credit Suisse Asset Management (selected funds), and Standard & Poors.  He is on the international advisory board of Miller Buckfire, a privately held financial restructuring firm, and also a member of the Board of Overseers of the International Rescue Committee.  His previous board service included Calpine Energy Inc., Alcan, Inc., The Conference Board, and the international advisory boards of Toyota and the Chicago Climate Exchange.

From 1993-1995, Garten was the undersecretary of commerce for international trade in the first Clinton administration, where he focused on promoting American business interests in Japan, Europe and many big emerging markets such as China, India, Brazil, and Turkey. He was deeply involved in the conclusion of the Uruguay Round of trade negotiations and in helping the U.S. and China to lay the groundwork for Beijing’s entry into the World Trade Organization.

From 1979 to 1992 he worked on Wall Street as a managing director of Lehman Brothers and, later, the Blackstone Group. During this time, he specialized in debt restructuring in Latin America, built up and directed all the Asian investment banking business for Lehman from Tokyo – including underwritings and M&A – and restructured some of the world’s largest shipping companies in Hong Kong.

From 1973 to 1978 he served on the White House Council on International Economic Policy in the Nixon administration and on the policy planning staffs of Secretaries of State Henry Kissinger and Cyrus Vance in the Ford and Carter administrations.

In 2000 he chaired a national task force for the Securities & Exchange Commission, comprised of leaders from business, finance and accounting, on the subject, “What Kind of Information Do Investors Need in the New Economy?”  From 2003 to 2007, he was one of five judges for the Financial Times-Goldman Sachs prize for the best business book of the year.

He is the author of A Cold Peace: America, Japan, Germany and the Struggle for Supremacy (Times Books, 1992); The Big Ten: The Big Emerging Markets and How They Will Change Our Lives (Basic Books, 1997); The Mind of the CEO (Basic Books, 2001); and The Politics of Fortune: A New Agenda For Business Leaders (Harvard Business School Press, 2002). From 1997 to 2005 he wrote a monthly column for Business Week on global business issues. His articles have also appeared in the New York Times, the Wall Street Journal, the Financial Times, Newsweek, the Harvard Business Review, and Foreign Affairs.

From 1968 to 1972 he served as a lieutenant in the 82nd Airborne Division, a captain in the U.S. Army Special Forces, and advisor to the Royal Thai Army.

Garten holds a B.A. from Dartmouth College, 1968, and a Ph.D. from the School of Advanced International Studies (SAIS) at Johns Hopkins University, 1980, where he specialized in international economics and international organizations.